You Can Now Run Android on an iPhone With ‘Project Sandcastle’ 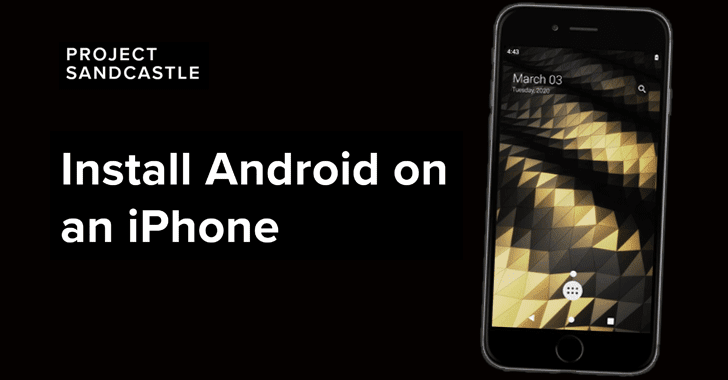 Not happy with your expensive iPhone and wondered if it’s possible to run any other operating system on your iPhone, maybe, how to install Android on an iPhone or Linux for iPhones?

Android phones can be rooted, and iPhones can be jailbroken to unlock new features, but so far, it’s been close to impossible to get Android running on iPhones, given the mobile device hardware constraints and software limitations.

However, it’s now possible to smoothly run Android on an iPhone—thanks to a new initiative, dubbed Project Sandcastle.

Undertaken by cybersecurity startup Corellium, Project Sandcastle is the consequence of a 13-year-long developmental effort to port Android to iOS and as well as demonstrate that Apple’s much-vaunted security barriers can indeed be compromised.

“Where sandboxes set limits and boundaries, sandcastles provide an opportunity to create something new from the limitless bounds of your imagination,” the project website says. “The iPhone restricts users to operate inside a sandbox. But when you buy an iPhone, you own the iPhone hardware.”

For now, only a handful of devices, the iPhone 7, the iPhone 7 Plus, and the iPod Touch, are capable of running a customized version of Android, which comes installed with OpenLauncher and the secure Signal messaging app.

Even then, there’re a lot of restrictions, including no support for audio output, cellular modem, Bluetooth, and camera, to name a few, as shown in the chart below.

All of this is only to say that Project Sandcastle is very much a work in progress.

The hack makes use of semi-tethered Checkra1n jailbreak to bypass restrictions, which is based on the checkm8 unpatchable bootrom exploit that makes it possible to gain deeper access to iOS.

It was initially released last November and works on the iPhone 5s to iPhone X, running iOS 12.3 and newer versions.