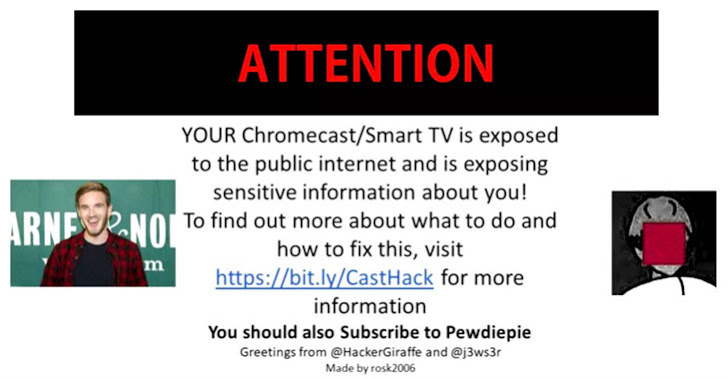 A group of hackers has hijacked tens of thousands of Google’s Chromecast streaming dongles, Google Home smart speakers and smart TVs with built-in Chromecast technology in recent weeks by exploiting a bug that’s allegedly been ignored by Google for almost five years.

The attackers, who go by Twitter handles @HackerGiraffe and @j3ws3r, managed to hijack Chromecasts’ feeds and display a pop-up, spreading a security warning as well as controversial YouTube star PewDiePie propaganda.

The hackers are the same ones who hijacked more than 50,000 internet-connected printers worldwide late last year by exploiting vulnerable printers to print out flyers asking everyone to subscribe to PewDiePie YouTube channel.

This time, the hackers remotely scanned the internet for compatible devices, including Chromecasts, exposed to the internet through poorly configured routers that have Universal Plug and Play [UPnP] enabled by default.

The hackers then exploited a design flaw in Chromecast that allowed them to access the devices and hijack their media streams to display a video message (as shown below) on connected televisions without authentication.