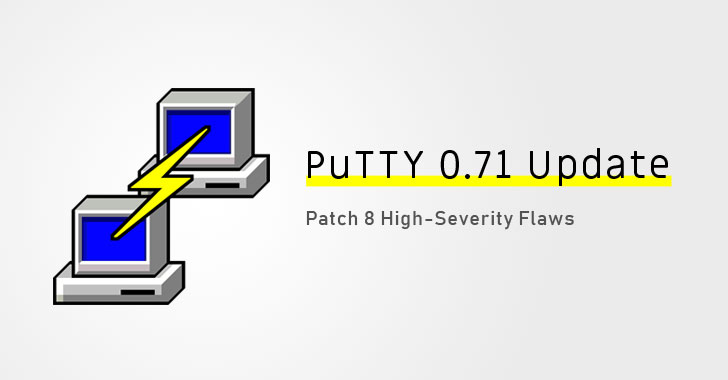 The popular SSH client program PuTTY has released the latest version of its software that includes security patches for 8 high-severity security vulnerabilities.

PuTTY is one of the most popular and widely used open-source client-side programs that allows users to remotely access computers over SSH, Telnet, and Rlogin network protocols.

Almost 20 months after releasing the last version of its software, the developers of PuTTY earlier this week released the latest version 0.71 for Windows and Unix operating systems.

According to an advisory available on its website, all previous versions of the PuTTY software have been found vulnerable to multiple security vulnerabilities that could allow a malicious server or a compromised server to hijack client’s system in different ways.

Here below I have listed all 8 vulnerabilities with brief information that PuTTY 0.71 has patched:

1) Authentication Prompt Spoofing — Since PuTTY doesn’t have a way to indicate whether a piece of terminal output is genuine, the user-interface issue could be exploited by a malicious server to generate a fake authentication prompt at the client side, prompting victims to enter their private key passphrases.

“If the server had also acquired a copy of your encrypted key file (which, for example, you might have considered safe to copy around because it was securely encrypted), then this would give it access to your private key,” the advisory explains.

2) Code Execution via CHM Hijacking — When a user launches the online help within the PuTTY GUI tools, the software tries to locate its help file alongside its own executable.

This behaviour could allow an attacker to trick the user into executing malicious code on the client system via the hijacking CHM file.

“If you were running PuTTY from a directory that unrelated code could arrange to drop files into, this means that if somebody contrived to get a file called putty.chm into that directory, then PuTTY would believe it was the real help file, and feed it to htmlhelp.exe.”

3) Buffer Overflow in Unix PuTTY Tools — According to the advisory, if a server opens too many port forwardings, PuTTY for Unix does not bounds-check the input file descriptor it collects while monitoring the collections of active Unix file descriptors for activity, leading to a buffer overflow issue.

“We don’t know if this was remotely exploitable, but it could at least be remotely triggered by a malicious SSH server, if you enabled any of the options that allow the server to open a channel: remote-to-local port forwarding, agent forwarding or X11 forwarding,” the advisory says.

“This occurred because of a one-byte buffer overflow in the random pool code. If entropy from an external source was injected into the random pool exactly when the current-position index was pointing at the very end of the pool, it would overrun the pool buffer by one byte and overwrite the low byte of the position index itself.”

A remote server can trigger the vulnerability by sending a short RSA key, leading to an integer overflow and uncontrolled overwriting of memory.