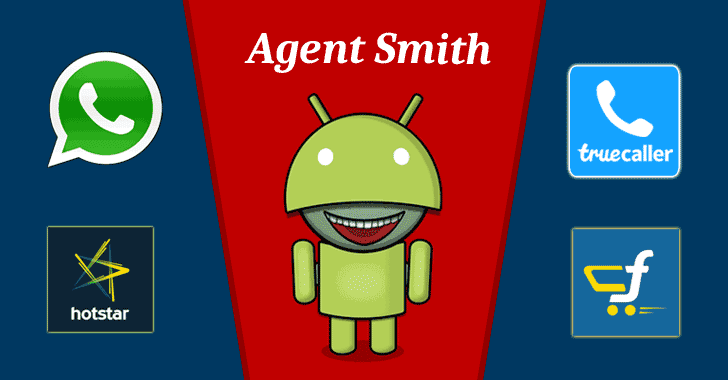 Are you sure the WhatsApp app you are using on your Android device is legitimate, even if it’s working perfectly as intended?

…Or the JioTV, AppLock, HotStar, Flipkart, Opera Mini or Truecaller app—if you have installed any of these?

Now the important question here is how they’re doing it and why?

According to researchers at Check Point, attackers are distributing a new kind of Android malware that disguises itself as innocent-looking photo editing, adult entertainment, or gaming apps and available through widely used third-party app stores.

Dubbed Agent Smith, the malware takes advantage of multiple Android vulnerabilities, such as the Janus flaw and the Man-in-the-Disk flaw, and injects malicious code into the APK files of targeted apps installed on a compromised device and then automatically re-install/updates them without the victims’ knowledge or interaction.

“It’s not enough for this malware family to swap just one innocent application with an infected double. It does so for each and every app on the device as long as the package names are on its prey list,” the researchers wrote in their report published Wednesday.

“Over time, this campaign will also infect the same device, repeatedly, with the latest malicious patches. This leads us to estimate there to be over 2.8 billion infections in total, on around 25 Million unique devices, meaning that on average, each victim would have suffered roughly 112 swaps of innocent applications.”