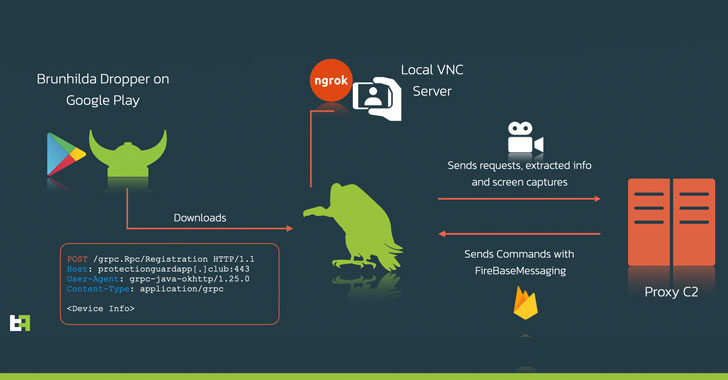 A previously undocumented Android-based remote access trojan (RAT) has been found to use screen recording features to steal sensitive information on the device, including banking credentials, and open the door for on-device fraud.

Dubbed “Vultur” due to its use of Virtual Network Computing (VNC)’s remote screen-sharing technology to gain full visibility on targeted users, the mobile malware was distributed via the official Google Play Store and masqueraded as an app named “Protection Guard,” attracting over 5,000 installations. Banking and crypto-wallet apps from entities located in Italy, Australia, and Spain were the primary targets.

“For the first time we are seeing an Android banking trojan that has screen recording and keylogging as the main strategy to harvest login credentials in an automated and scalable way,” researchers from ThreatFabric said in a write-up shared with The Hacker News.

“The actors chose to steer away from the common HTML overlay development we usually see in other Android banking Trojans: this approach usually requires a larger time and effort investment from the actors to create multiple overlays capable of tricking the user. Instead, they chose to simply record what is shown on the screen, effectively obtaining the same end result.”