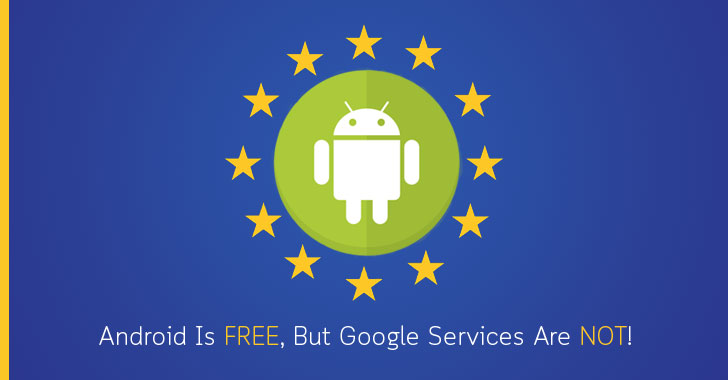 Would you prefer purchasing an Android device that doesn’t have any apps or services from Google? No Google Maps, No Gmail, No YouTube!

Because if you live in Europe, from now on, you have to spend some extra cash on a smartphone with built-in Google services, which were otherwise until now freely available and already included in the cost of your smartphone.

For the very first time, Google has announced its plans to charge a fee to European Android phone manufacturers who want to include a free version of Google apps on their Android handsets.

In short, Android phone makers will now have to pay Google for installing the Play store, Gmail, YouTube, Maps, and Chrome, that are usually considered to be core parts of the Android operating system, but are actually Google services.

“Since the pre-installation of Google Search and Chrome together with our other apps helped us fund the development and free distribution of Android, we will introduce a new paid licensing agreement for smartphones and tablets shipped into the EEA. Android will remain free and open source,” Google said in a blog post.

Here’s Why Google Have to Charge Android Device Manufacturers

The move comes in response to this summer ruling by the European Commission, which hit Google with a record $5 billion antitrust fine for abusing the dominance of its Android mobile operating system and thwarting competitors.

Google invested billions of dollars in creating Android OS and still spending millions to maintain the project. To keep its mobile operating system open-source and free, Google asks device manufacturers to pre-install a suite of popular Google apps that generate revenue for the company.

But the European Commission ruled that Google should stop forcing Android phone manufacturers to “illegally” tie its proprietary apps and services—specifically, Chrome and Google Search—to Android, as it unfairly blocked competitors from reaching consumers.

Google is in the process of appealing the fine but said in the meantime, the company is complying with the new licensing scheme for Android devices launched after October 29 in the European Economic Area, which comprises the 28 EU countries, along with Iceland, Liechtenstein and Norway.