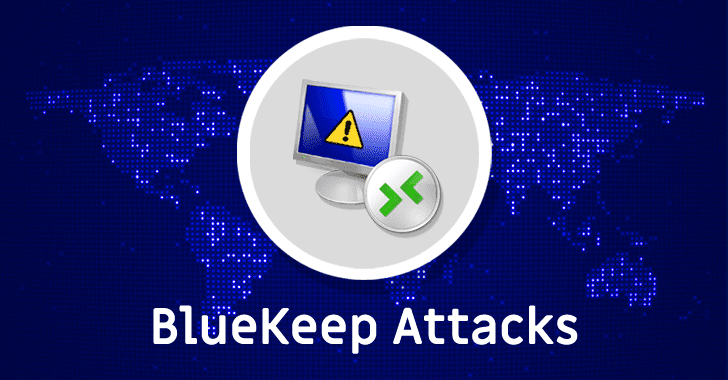 Cybersecurity researchers have spotted a new cyberattack that is believed to be the very first but an amateur attempt to weaponize the infamous BlueKeep RDP vulnerability in the wild to mass compromise vulnerable systems for cryptocurrency mining.

In May this year, Microsoft released a patch for a highly-critical remote code execution flaw, dubbed BlueKeep, in its Windows Remote Desktop Services that could be exploited remotely to take full control over vulnerable systems just by sending specially crafted requests over RDP.

BlueKeep, tracked as CVE-2019-0708, is a wormable vulnerability because it can be weaponized by potential malware to propagate itself from one vulnerable computer to another automatically without requiring victims’ interaction.

BlueKeep has been considered to be such a serious threat that since its discovery, Microsoft and even government agencies [NSA and GCHQ] had continuously been encouraging Windows users and admins to apply security patches before hackers gain hold onto their systems.

Even many security firms and individual cybersecurity researchers who successfully developed a fully working exploit for BlueKeep pledged not to release it to the public for a greater good—especially because nearly 1 million systems were found vulnerable even a month after patches were released.

This is why amateur hackers took almost six months to come up with a BlueKeep exploit that is still unreliable and doesn’t even have a wormable component.

The BlueKeep exploitation in the wild was first speculated by Kevin Beaumont on Saturday when his multiple EternalPot RDP honeypot systems got crashed and rebooted suddenly.​