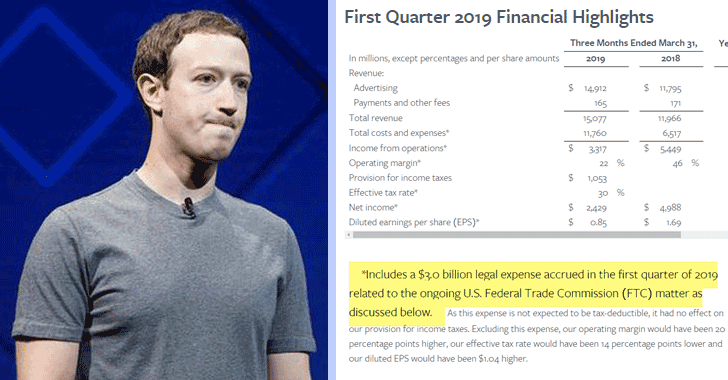 Facebook expects to face a massive fine of up to $5 billion from the Federal Trade Commission (FTC) as the result of an investigation into its privacy policies—that’s about one month’s revenue for the social media giant.

To be clear the amount of fine is not what the FTC has announced or hinted yet; instead, it’s an estimated due that Facebook disclosed on Wednesday in its first quarter 2019 financial earnings report.

In its earnings report, Facebook said the company had set $3 billion aside in anticipation of the settlement with the FTC, who launched a probe into Facebook following the Cambridge Analytica scandal.

The probe centres around the violation of a 2011 agreement Facebook made with the FTC that required the social media to gain explicit consent from users to share their data.

The FTC launched an investigation into Facebook last year after it was revealed that the company allowed Cambridge Analytica access to the personal data of around 50 million Facebook users without their explicit consent.

Now, both parties are nearing a settlement, with Facebook anticipating the fine to between $3 billion and $5 billion.

“In the first quarter of 2019, we reasonably estimated a probable loss and recorded an accrual of $3.0 billion in connection with the inquiry of the FTC into our platform and user data practices,” Facebook said in its earnings report.

“We estimate that the range of loss in this matter is $3.0 billion to $5.0 billion. The matter remains unresolved, and there can be no assurance as to the timing or the terms of any final outcome,” Facebook noted.