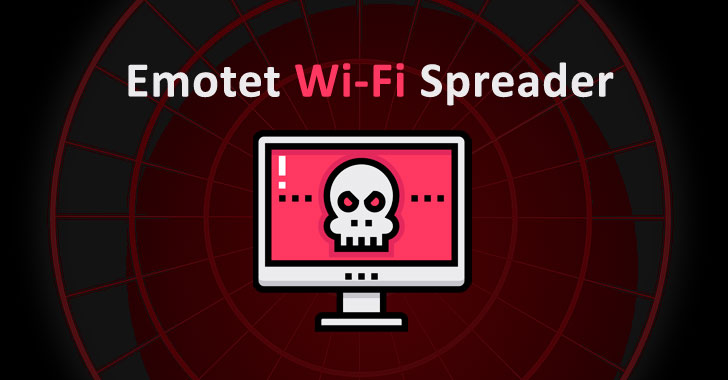 Emotet, the notorious trojan behind a number of botnet-driven spam campaigns and ransomware attacks, has found a new attack vector: using already infected devices to identify new victims that are connected to nearby Wi-Fi networks.

According to researchers at Binary Defense, the newly discovered Emotet sample leverages a “Wi-Fi spreader” module to scan Wi-Fi networks, and then attempts to infect devices that are connected to them.

The cybersecurity firm said the Wi-Fi spreader has a timestamp of April 16, 2018, indicating the spreading behavior has been running “unnoticed” for close to two years until it was detected for the first time last month.

The development marks an escalation of Emotet’s capabilities, as networks in close physical proximity to the original victim are now susceptible to infection.

The updated version of the malware works by leveraging an already compromised host to list all the nearby Wi-Fi networks. To do so, it makes use of the wlanAPI interface to extract the SSID, signal strength, the authentication method (WPA, WPA2, or WEP), and mode of encryption used to secure passwords.

On obtaining the information for each network this way, the worm attempts to connect to the networks by performing a brute-force attack using passwords obtained from one of two internal password lists. Provided the connection fails, it moves to the next password in the list. It’s not immediately clear how this list of passwords was put together.​