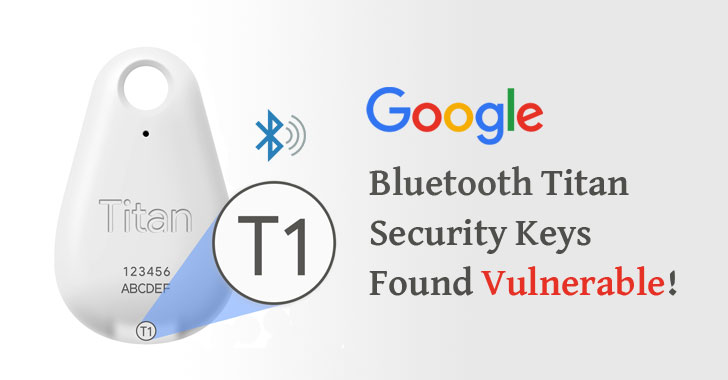 A team of security researchers at Microsoft discovered a potentially serious vulnerability in the Bluetooth-supported version of Google’s Titan Security Keys that could not be patched with a software update.

However, users do not need to worry as Google has announced to offer a free replacement for the affected Titan Security Key dongles.

In a security advisory published Wednesday, Google said a “misconfiguration in the Titan Security Keys Bluetooth pairing protocols” could allow an attacker who is physically close to your Security Key (~within 30 feet) to communicate with it or the device to which your key is paired.

According to Google, the vulnerability only affects the BLE version of Titan Security Keys that have a “T1” or “T2” sign on the back of it, and other non-Bluetooth security keys, USB or NFC supported versions, are safe to use.

“When you’re trying to sign into an account on your device, you are normally asked to press the button on your BLE security key to activate it. An attacker in close physical proximity at that moment in time can potentially connect their own device to your affected security key before your own device connects. In this set of circumstances, the attacker could sign into your account using their own device if the attacker somehow already obtained your username and password and could time these events exactly.”

“Before you can use your security key, it must be paired to your device. Once paired, an attacker in close physical proximity to you could use their device to masquerade as your affected security key and connect to your device at the moment you are asked to press the button on your key. After that, they could attempt to change their device to appear as a Bluetooth keyboard or mouse and potentially take actions on your device.”

Microsoft originally discovered the vulnerability and disclosed it to Google, as well as Feitian, the company that makes Titan Keys for Google and also sells the same product (ePass) under its own brand.