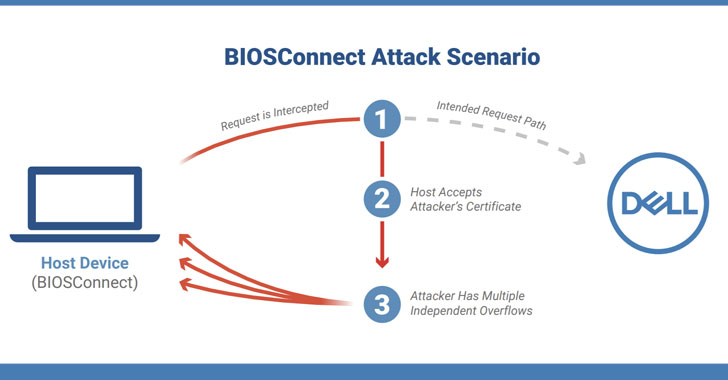 Cybersecurity researchers on Thursday disclosed a chain of vulnerabilities affecting the BIOSConnect feature within Dell Client BIOS that could be abused by a privileged network adversary to gain arbitrary code execution at the BIOS/UEFI level of the affected device.

“As the attacker has the ability to remotely execute code in the pre-boot environment, this can be used to subvert the operating system and undermine fundamental trust in the device,” researchers from enterprise device security firm Eclypsium said. “The virtually unlimited control over a device that this attack can provide makes the fruit of the labour well worth it for the attacker.”

In all, the flaws affect 128 Dell models spanning across consumer and business laptops, desktops, and tablets, totalling an estimated 30 million individual devices. Worse, the weaknesses also impact computers that have Secure Boot enabled, a security feature designed to prevent rootkits from being installed at boot time in memory.

BIOSConnect offers network-based boot recovery, allowing the BIOS to connect to Dell’s backend servers via HTTPS to download an operating system image, thereby enabling users to recover their systems when the local disk image is corrupted, replaced, or absent.

Successful exploitation of the flaws could mean loss of device integrity, what with the attacker capable of remotely executing malicious code in the pre-boot environment that could alter the initial state of the operating system and break OS-level security protections.