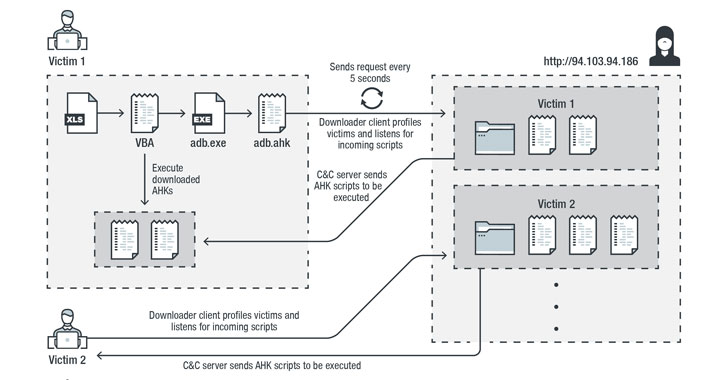 Threat actors have been discovered distributing a new credential stealer written in AutoHotkey (AHK) scripting language as part of an ongoing campaign that started early 2020.

Customers of financial institutions in the US and Canada are among the primary targets for credential exfiltration, with a specific focus on banks such as Scotiabank, Royal Bank of Canada, HSBC, Alterna Bank, Capital One, Manulife, and EQ Bank. Also included in the list is an Indian banking firm ICICI Bank.

AutoHotkey is an open-source custom scripting language for Microsoft Windows aimed at providing easy hotkeys for macro-creation and software automation that allows users to automate repetitive tasks in any Windows application.

The multi-stage infection chain commences with a malware-laced Excel file that’s embedded with a Visual Basic for Applications (VBA) AutoOpen macro, which is subsequently used to drop and execute the downloader client script (“adb.ahk”) via a legitimate portable AHK script compiler executable (“adb.exe”).