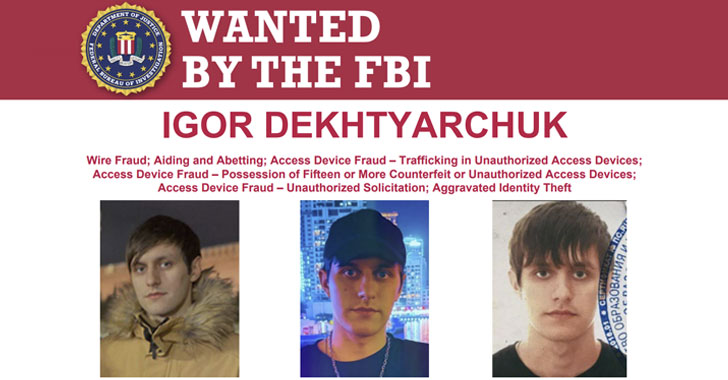 A 23-year-old Russian national has been indicted in the U.S. and added to the Federal Bureau of Investigation’s (FBI) Cyber Most Wanted List for his alleged role as the administrator of Marketplace A, a cyber crime forum that sold stolen login credentials, personal information, and credit card data.

Igor Dekhtyarchuk, who first appeared in hacker forums in 2013 under the alias “floraby,” has been accused of charges of wire fraud, access device fraud, and aggravated identity theft, a set of offenses that could lead to up to 20 years in federal prison.

According to the FBI’s Wanted poster, Dekhtyarchuk previously studied at the Ural State University in Yekaterinburg, Russia, and was last known to reside in the city of Kamensk-Uralsky.

“Marketplace A specialized in the sale of unlawfully obtained access devices for compromised online payment platforms, retailers, and credit card accounts, including providing the data associated with those accounts such as names, home addresses, login credentials, and payment card data for the victims, who are the actual owners of those accounts,” the U.S. Justice Department said in a statement.

More than 48,000 compromised email accounts and over 39,000 online accounts are alleged to have been traded on the marketplace since its launch in May 2018, with the service averaging about 5,000 daily visitors.